How is the interest rate cap going to shape up the microfinance sector?

Home Media How is the interest rate cap going to shape up the microfinance sector?

How is the interest rate cap going to shape up the microfinance sector? 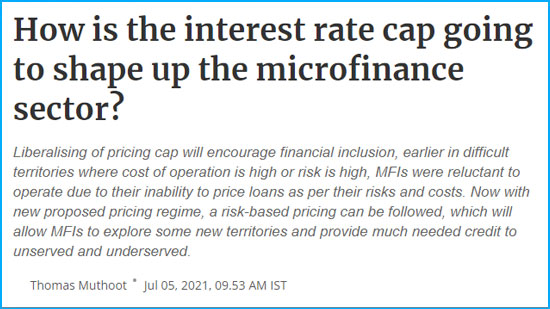 Liberalising of pricing cap will encourage financial inclusion, earlier in difficult territories where cost of operation is high or risk is high, MFIs were reluctant to operate due to their inability to price loans as per their risks and costs. Now with new proposed pricing regime, a risk-based pricing can be followed, which will allow MFIs to explore some new territories and provide much needed credit to unserved and underserved.

On 14th of June 2021, Reserve Bank of India released a consultative document on Regulations of Microfinance; these draft regulations are nothing less than a major reform for the Microfinance Industry. This is a very pragmatic and visionary document which liberalizes the regulations governing microfinance lending. The documents aim to harmonise regulation among all players in the microfinance industry and foster competition which will ultimately benefit the end borrowers.

One of the biggest reforms among many in the draft document is liberalising the pricing regime for NBFC-MFI. Till Now NBFC-MFIs were required to maintain their lending rate as lower of the two formulae shown below: