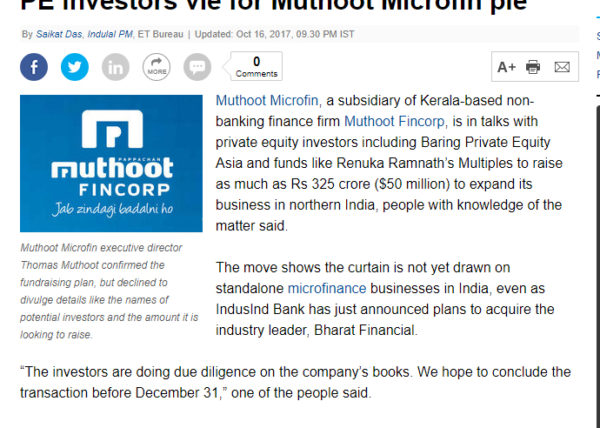 Muthoot Microfin, a subsidiary of Kerala-based non-banking finance firm Muthoot Fincorp, is in talks with private equity investors including Baring Private Equity Asia and funds like Renuka Ramnath’s Multiples to raise as much as Rs 325 crore ($50 million) to expand its business in northern India, people with knowledge of the matter said.

The move shows the curtain is not yet drawn on standalone microfin businesses in India, even as IndusInd Bank has just announced plans to acquire the industry leader, Bharat Financial.

“The investors are doing due diligence on the company’s books. We hope to conclude the transaction before December 31,” one of the people said.

Muthoot Microfin executive director Thomas Muthoot confirmed the fundraising plan, but declined to divulge details like the names of potential investors and the amount it is looking to raise. “To fuel growth in the current financial year, we are planning to raise money through a private equity deal,” he told ET. “Nothing is finalised yet.”

Multiples has made aggressive bets in financial services. Its investments include South Indian Bank, RBL and Vastu Housing Finance Corp.

Baring has been negotiating to buy ICICI Home Finance last year. It has been one of the most aggressive Asian investors in India.

At the beginning of 2017, the Muthoot Pappachan Group company had raised about Rs 130 crore from PE fund Creation Investments.

It plans to use the proceeds from the proposed deal to open 90 new branches in the northern part of the country, the people said.

Muthoot Microfin claims to serve 15 lakh households in 16 states and union territories through 429 branches. It aims to disburse about Rs 3,500 crore of loans this financial year.

The company’s loan book is now at nearly Rs 2,504 crore with a gross bad loan ratio at 1.29%. The share of sticky loan is way below the microfin industry average, which according to market estimate is about 8%.

The company keeps raising money through corporate bond sales, known as non-convertible debentures in market parlance. It has so far sold Rs 280 crore worth of such instrument through private placement deals.

It has raised also Rs 3,806 crore from banks and financial institutions, including Rs 1,058 crore during April-September this year.

“The group management is nurturing a long-term plan to list its microfin company, maybe in the next two years. By then, these private equity investors will exit at a profit,” said one of the people ET spoke to.