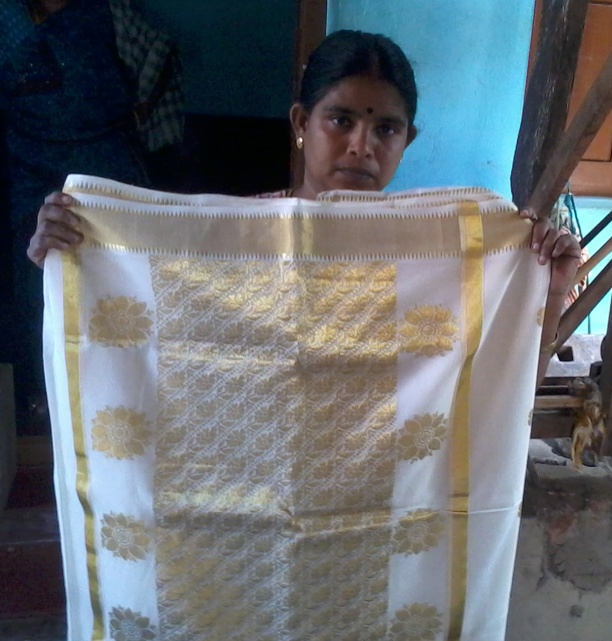 Kallanchira in Peruvemba is a weaving village in Palakkad district of Kerala. Its once thrived handloom industry was a major source of revenue for many people in the area. However, the industry is facing a downturn these days as low wage coupled with other issues forcing traditional handloom workers to shift to other professions.

41 year old Ambika Chitravani, a traditional weaver from the locality was also forced to try other options as her family, consisting of her husband and three children, struggled to make both ends meet with the paltry income from weaving.
Hardly a year ago, Ambika and her husband Chitravani’s hard work never earned them enough money to even survive. “For weaving a sari, it needs the labour of two of us for two days and all we got then was just ₹ 450 for one sari; ₹ 225 each for two days work. How can a family survive with that amount” she said.

However they didn’t leave their traditional job. They were among the very few working in the sector during those turbulent periods as most of the people left the profession and switched to other jobs. Ambika knew she can earn extra income from the sector only if she managed to get more raw materials to weave other dress materials apart from sarees. The raw materials are available at the nearby cooperative society but the lack of capital to buy from them remained an obstacle for her. She had earlier availed a loan from a local firm but that wasn’t enough for a start. She then approached many banks and other financial institutions for the capital but all of them denied her citing lack of collateral.

She wasn’t aware of Muthoot Microfinance and its style of operations and was wondered when an RO from the Palakkad branch approached her and explained the institutions working pattern. In quick time, Ambika became a Muthoot Microfinance client and was offered a first cycle of loan. She bought enough raw materials from the Society and worked hard for the next couple of months which yielded good results. Her family’s income increased gradually thereafter from a meagre ₹ 150 a day to ₹ 500 a day. Ambika availed her second cycle of loan from the Institution and the family’s income climbed to such an extent now that they can save an amount each month for their children’s future.