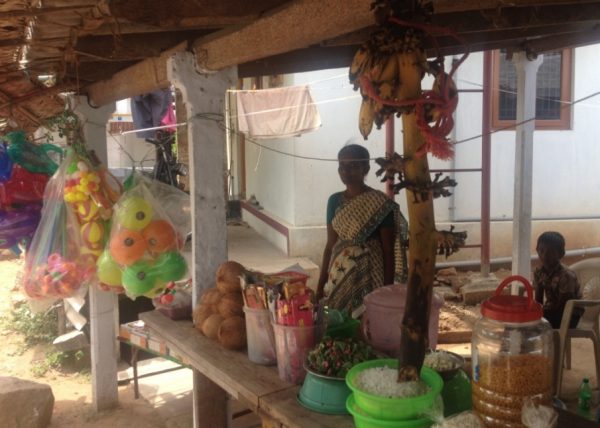 Mahalakshmi is a 38-year-old house wife from Soolakkal in Coimbatore district, Tamil Nadu. Born and raised in this small village on the outskirts of Pollachi, she has only primary education and was married early. Her husband, Karuppasamy is a daily labourer and was often out of work during the rainy seasons which makes living harder for the family of four that includes two small children.

The situation forced Mahalakshmi to find a way to earn for her family and she was quick to notice the potential of a shop to sell Pooja items and other stationaries in the locality which is known for the famous Mariamman temple. The worshippers come in hundreds daily and on Tuesdays and Fridays the numbers touch many thousands. She soon realized that while worshippers often had to bring their pooja items or to walk many miles to avail them as there were few places for them to get pooja items in Soolakkal.

Mahalakshmi took loan from a local institution and started her business. However, the loan amount was too low for her to buy enough materials to attract customers in large numbers and her business remained modest for the first six months. Her average daily income remained below ₹200. However, she knew that with more stocks, the business can grow in quick time but raising more money remained a challenge for her as she has to repay the earlier loan with the modest income apart from running the family.

She was forced to live with the limited income for a year. Mahalakshmi got a lucky break a year later when a Relationship Officer from the local Muthoot Microfin branch visited her house as part of street survey and explained to her the institution’s operations which doesn’t require collateral to avail a loan. A first cycle loan of ₹10,000 was granted to her after a week and she utilised it to buy enough raw materials. Within a week her business improved as more customers turned in and the income also began to soar and hit an average ₹1400 a day, out of which she manages an average profit of around ₹400.

After the completion of the first cycle loan, she availed a second cycle loan of ₹25,000 and expanded the business by adding a tea stall which is also making good profit. A thankful Mahalakshmi says “Muthoot Microfin came to my life at the right time and helped my family out of poverty. Apart from the loan, the training and financial literacy classes given by the company was also very valuable to me, as I learned business skills for the first time in my life”.